If you’re a lover of sports films, you may remember a movie that came out a few years back that told the story of Billy Beane, the general manager of the Oakland Athletics, who used a strict set of analytics to assemble a team operating within a tight budget. It was a method unheard of by the MLB, but one that found unexpected major success. The 2002 Oakland A’s claimed the franchise’s regular season record, going an amazing 103-59, and won 20 games in a row that represented an American League record at the time. Beane signed players that other teams wanted no part of;  they were practically baseball outcasts. But, without any star power on the ball club, Beane somehow engineered a team built to win. He did it by finding value where no one else did, using statistics that were overlooked by everyone else in the league. It was truly an unbelievable feat, looking back on it. Well, the circumstances for the Oakland Athletics haven’t changed. They currently have the lowest payroll in all of baseball, but have once again emerged as playoff contenders out of seemingly nowhere. It appears that Beane may be working his “Moneyball” magic once again, turning his team into one that should be taken seriously; even with a shoestring budget.  Since July 1st, the A’s are 30-10, which is the best record in baseball during that time span. They are currently in sole possession of the second AL wildcard spot. The question we are all asking is, how have they done it? 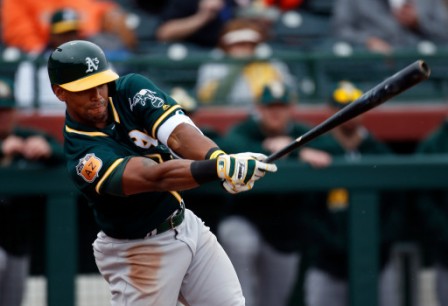 Make no mistake, the Oakland A’s are a very good team. They are much different than that of the 2002 squad who was filled with forgotten veterans and on-base hounds. This team sports young, homegrown talent that appears to be fulfilling its potential right before our very eyes. Third baseman Matt Chapman is an electrifying defender who can also do some damage with the bat. Matt Olson hits the ball as hard as anyone in the MLB, and has 21 homers to show for it so far this year. Their main offensive threat is Khris Davis, who is on pace yet again for another 40 homer, 100 RBI season. However, no team is complete without some sort of ace on the pitching side, and Sean Manaea has filled that role admirably this season. Back in April, he threw the 12th no-hitter in Athletics history. And if you thought this single performance was a fluke, he has backed it up with solid numbers so far this season, sporting an excellent 3.38 ERA and 1.01 WHIP. He is an example of one of the many breakouts for Oakland this year that has helped them to surprise everyone in baseball and challenge for the pennant. The A’s wouldn’t be nearly as far without him, especially due to the fact that they had seven starters go down with injury before May. Look, they still don’t have the best pitching numbers, holding a collective team ERA of 4.34, but it is simply remarkable that they have been able to remain firmly in AL playoff race with that kind of adversity.

This was a team that had an over/under win total of 74 before the season began. As of today, they have 64 wins and the calendar month just turned to August. Maybe the most surprising heroes for the A’s this season is the bullpen duo of Lou Trivino and Blake Treinen. Both of these pitchers were in rough spots around this time a year ago. Treinen was a member of the Nationals and carried an unsightly ERA of 6.11, and Trivino wasn’t even in the majors, pitching for Triple-A Nashville in a long relief role. If you would have told anyone that these two would form an elite one-two punch in late relief for an MLB in 2018, no one would have believed it. But, here we are today; Trivino is 8-1 and carries a sparkling 1.22 ERA with 57 strikeouts over 49.5 innings. Treinen is third in all of baseball with 27 saves and an unreal 1.02 ERA. The bullpen has been able to negate the pitching struggles enough, and we are seeing how crucial of a role a formidable 7th-8th-9th inning combination can really be.  These guys are truly thriving in an ever-important role of helping to win close games in Oakland, something that the A’s have been in a lot.

One of the biggest reasons for the A’s surge is their unbelievable offensive performance in late-game situations. This team has defined clutch throughout their torrid stretch. Per Mercury News, Oakland has scored 211 runs in the seventh inning and later this season, by far the most in the MLB. This is 20 more than the Astros, the next best team in the category. In the eight inning and on, they own an OPS of .843, over 130 points higher than their .711 OPS through the first six innings. They have become synonymous with late-game comebacks, with perhaps their most stunning one on July 24, where they back down from 8 runs, scoring 11 straight to win 13-10 in extras against the Texas Rangers. An elite bullpen duo and ridiculous late game hitting has been a huge part of what has put them in sole possession of the second AL wildcard spot.  What makes this victory even more incredible is that it is a microcosm of the Oakland A’s entire season thus far. They had the odds stacked against them before the season even started, with the lowest payroll in baseball, a plethora of injuries, and a team young and void of playoff experience. Whether you believe this is just a long hot streak or that they are indeed legit, you have to appreciate what this team has been able to accomplish with the disadvantages they have faced. 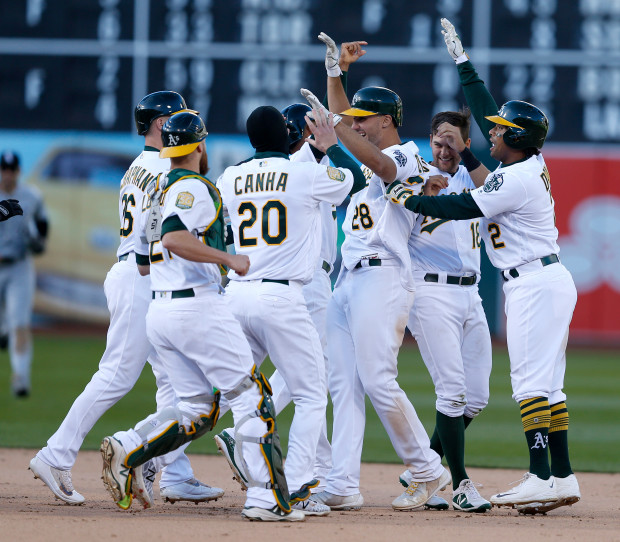 Could this method of winning games be an effective strategy come October? Well, let’s throw it back to 2015, when the Kansas City Royals won the World Series against the New York Mets. The Royals team of that year reminds me a little bit of this A’s team. They didn’t have superior starting pitching, or anything close to it, really. There wasn’t a single ace in that rotation. Edinson Volquez may have been their most consistent pitcher. But, what they did have was an elite bullpen, where they unleashed a three-headed monster of Greg Holland, Kelvin Herrera, and Wade Davis that tortured whoever challenged to step in their way. They started something that other teams eventually ended up copying, and proved that you don’t need the best starting pitching if you have lock-down relievers who can protect leads like no other. Now, I’m not saying the Oakland A’s are a lock to win the World Series, but what I am saying is that we shouldn’t discredit what they have been able to do or place it purely on luck. I believe their success is sustainable, even when they inevitably cool down.

One thing we know is, anything can happen in October. In the book “Moneyball” by Michael Lewis, Billy Beane has a famous quote about his theory of building a team on unique analytics where he says “My [expletive] doesn’t work in the playoffs. My job is to get us to the playoffs. What happens after that is [expletive] luck.” The way the A’s are playing, they might not need much luck to make this season one to remember.